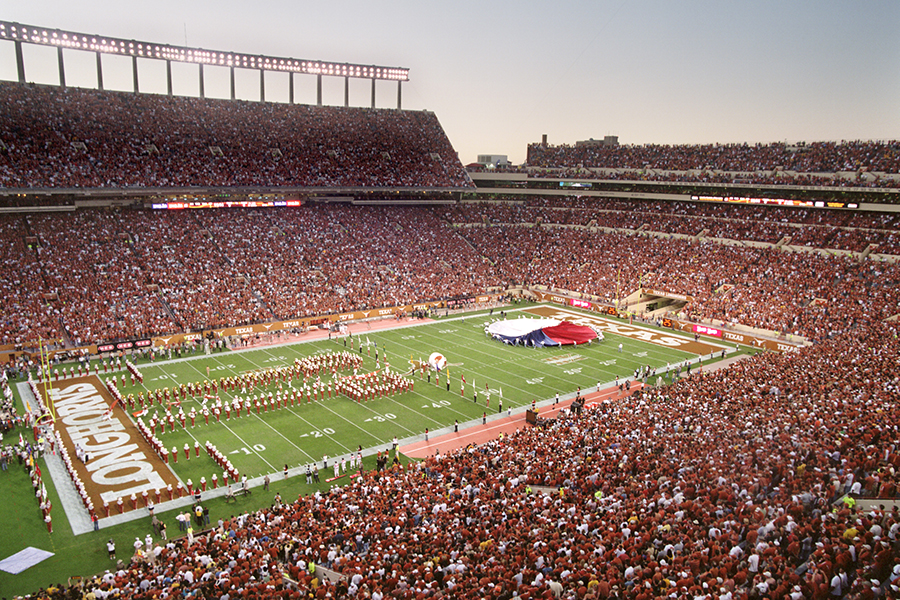 The stadium has delivered a home field advantage with the team’s home record through November 17, 2018, is 374–117–10, which is a whopping 76.4% win rate. Additionally, the current official stadium seating capacity of 100,119 makes the stadium the largest in the Big 12 Conference. It is also the eighth largest stadium in the United States and the ninth largest stadium in the world.

The student body dedicated the stadium in honor of the 198,520 Texans who fought in World War I. 5,280 of those Texans were killed in action. A statue representing the figure of democracy was later placed atop the north end zone seats of the stadium. Later on, in World War II, Texas University lost many of their former players, including former coach Jack Chevigny. The Athletics Council rededicated the newly enlarged stadium on September 18, 1948, prior to the Texas-LSU game. It was in honor of the men and women who had died in the war. A small granite monument was unveiled and placed at the base of the statue, during the TCU-Texas game on November 12, 1977. This ceremony was to rededicate Texas Memorial Stadium to the memory of all alumni in all American wars.

Like most of the stadiums in the States, the Texas Memorial Stadium has gone through a number of expansions since its opening. The most recent completed project was a $27 million expansion and renovation project to the south end zone facilities in August 2009. For the 2009 season, 4,525 permanent bleacher seats were constructed. This renovation allowed the stadium to become the first football stadium in Texas capable of seating in excess of 100,000 people. In May 2013, Regents for the University of Texas approved another $62 million stadium improvement project. The 2013 project was to improve and add athletic and academic facilities within the existing stadium structure, and not to expand the seating capacity.

Texas Memorial Stadium attendance record is at 103,507 spectators. This record was set on September 15, 2018, when Texas played The University of Southern California. Texas won by a scorecard of 37–14.

In September 2018, The University of Texas at Austin has picked Kansas City-based Populous firm to design a $175 million update to its football stadium. During an interview, UT Athletics Director Chris Del Conte said he was thrilled “to be in the final planning stages” of the project.

Below is his statement at the interview:

“The new south end zone will provide our student-athletes, staff, and fans with the finest facility in the country and one that we all can be extremely proud of,” he said in a statement. “It will feature the best of the best when it comes to student-athlete amenities and training needs, first-rate coaching staff offices and meeting rooms along with state-of-the-art opportunities and experiences for our many fans and supporters.”

According to the announcement that was made in September 2018, the design will add club suites to the south end zone, in addition to enclosing the stadium’s “bowl.” It would carry over the architecture of the north and east sides “through new entry towers and filling in the corners with concessions-equipped terraces”. There will also be a new super-sized video board that is even larger than the current “Godzillatron” to show replays and hype up the crowd. Multiple corner patios with field views and a new stage for Longhorn Network broadcasts are also included. However, the renovation is not meant to expand seating capacity and is expected to be completed before the beginning of the 2021 season.

For further information on the Darrell K Royal Texas Memorial Stadium, visit the pages listed below.